Posted by Jamie Leonard '21 as part of the course “Myth and Modernity” taught in Spring 2020.

After our discussion on Thursday, what I took away from Kleist’s “The Earthquake” is the argument that events cannot be characterized according to a simple pattern of causation based on God’s interference in the human realm. Even if we leave aside the explicitly religious, we must be careful not to just turn to appeals to other transcendent powers — in God’s stead, “the destructive fury of nature” will not save us either (54). But what comes after this? One obvious answer: A Kantian emergence from our immaturity, intentionally and bravely choosing the option of reason at every moment. Another answer, which does not contradict the first: A commitment to the human, to the idea that human acts have no transcendent origins, but also that enchantments created by humans can be just as enchanting without being divine. Along those lines, here are some disjoint thoughts.

Adorno in the Supermarket

I was watching a video of Zadie Smith interviewing Karl Ove Knausgaard this week. They were discussing Karl Ove’s book My Struggle, which is essentially a very long (>3000 page) autobiography made up largely of Karl Ove describing the most mundane daily tasks — going to the supermarket, preparing dinner, putting his kids to bed, trying to write — in great detail. The book has been compared to Proust’s In Search of Lost Time, except that where Proust focuses so much, and so successfully, on beautiful description, Karl Ove describes things plainly, trying to convey the mundanity of life, the way most things really feel. However, the book is also interspersed with meditations on writing and other forms of art. Smith asks how these “clearly theoretical arguments” can exist alongside descriptions of such banality. At one moment in his response, Karl Ove says:

The whole academic way of thinking is to isolate thinking, isolate the object. It’s not like that at all. I mean, we are accepting everything, even, even you know, reading Adorno or whoever, you feel something, but all the feelings are just separated. And that’s a very conscious thing in the book, that these things are the same, it is possible to think about, you know, Adorno when you are buying things in the supermarket, or it’s like they exist at the same level.

This is key to the radical form of Knausgaard’s book. He is thinking about Madame Bovary, he is moving into a new office, he is theorizing about expressionism, all at the same time. This seems relevant to our class and to this platform, to the idea that thinking occurs in many forms. Just as philosophy and art are inseparable, Knausgaard shows us that these fundamentally human acts, often characterized as transcendent, existing on higher plane than everyday life, are in fact inseparable from ordinary daily life. Thinking and feeling, art, philosophy, and the mundanity of life — they all exist together, and are often the same thing. Art, particularly, seems so often to be thought of as a transcendent act: artists, as prophets, have some divine vision, some special power apart from “normal” people. Even the devoutly secular (myself included) speak as if artists exist on a superior plane. Beyond “I could never do that,” we say “I could never do anything like that,” “I could never be a painter,” “I don’t have any ear for music”. I think if we are to accept what I understand to be the lessons from “The Earthquake,” we must also accept that art and philosophy exist on the same plane as every human act, that we are all always artists and philosophers.

Along those lines, I also wanted to share some music.

I have been listening to a lot of recordings from the pianist Ellis Marsalis since he died of coronavirus just a couple weeks ago. I do not want to place jazz above other forms of music, but jazz often feels, to me, like the form of music most reliant on human connection. Improvisation, at the heart of jazz, is a conversation through music. It requires extraordinary attention to one’s bandmates. Jazz is also firmly rooted in tradition. In pop music, to use in one’s own song part of the melody of another might be called “plagiarism”. In jazz, to use in one’s own improvisation the melody of another song or a line from someone else’s improvisation is called “quoting”. No attribution is needed because jazz musicians and listeners tend to be familiar with the source of a quote and to take as granted that the quoting is a sign of respect. To write a song using one’s own melody over the chord progression of another song is called a “contrafact” and is very common.

Nicholas Payton, usually classified as a jazz trumpeter and pianist, refuses to call his music jazz. Rather, he calls it Black American Music or some form of New Orleans Music. He is part of a “lineage,” a “blood line” of ancestors who “didn’t play Jazz, they played Traditional, Modern and Avant-garde New Orleans Music” and had the label of jazz “forced upon” them. Payton goes on to say, like Knausgaard, that:

Jazz is a brand…. I believe music to be more of a medium than a brand. Silence is music, too. You can’t practice art. In order for it to be true, one must live it. Existence is not contingent upon thought.

Payton says that Marsalis does not play jazz, he plays “Modern New Orleans Music”. In a genre rooted in tradition, Marsalis’s music is especially so. It is important to note too, that Marsalis is considered one of the great jazz educators of the last several decades. He had four sons who are all famous jazz musicians, and he educated many other well known musicians (and countless others who are less well-known).

The song I am sharing is Marsalis playing “Mood Indigo,” which is by Duke Ellington. Covers — renditions of others’ songs — are, as far as I can tell, much more common in jazz than other genres. The cover seems like just another sort of improvisation, not with one’s bandmates but with the composer of the song and with every other musician who has played it. Playing a cover of a great song takes so much modesty and so much courage — just the kind of modesty and courage necessary to see oneself as a philosopher and artist.

Before the video of Marsalis, I added a video of Duke Ellington playing the song. Ellington often played in and wrote for a big band, but I chose this video because next to Marsalis’s version, the lineage Payton refers to becomes evident. Marsalis’s respect for Ellington is so clear. Marsalis plays the song in a similar tempo with many similar chord voicings, and with astonishing delicacy, much like Duke. If you listen to the recordings one ofter the other, it is like you can literally hear Marsalis picking up where Ellington left off. But Marsalis’s playing is also unmistakably his own.

“Enchantments of the Ordinary”

Talking just like this late at night
all depends on a sense of mystery;
the same things in a different light.

Your whiskey glass and the watercolour
just off-centre are
part of this. The electric pallor

of that apple, also. And the slow
arc of an indoor palm, the vase beside it blooming
with shadows. Do you remember how

the power cuts caught us unawares?
No candles and no torch. It was high
summer. A soft brightness clung in the poplars,

for hours it seemed. When it went out,
everything we knew how
to look for had disappeared. And when light

came back, it came back as noise:
the radio; the deep freeze singing.
Afterwards we talked of it for days –

how it felt at the upstairs window,
to stand and watch and still miss the moment
of gable ends and rooftops beginning

to be re-built. And that split second when
you and I were, from a distance,
a neighbourhood on the verge of definition. 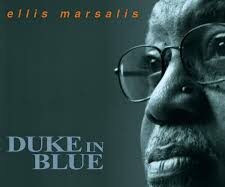 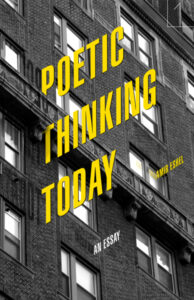